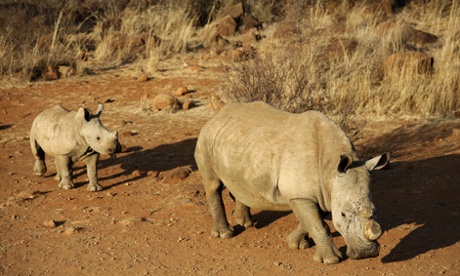 A black dehorned rhinoceros is followed by a calf on August 3, 2012 at the Bona Bona Game Reseve, 200 kms southeast of Johannesburg. South Africa has seen a devastating increase in poaching in recent years as black-market demand for rhino horn has grown. Last year poachers killed 448 rhinos, up from 333 in 2010 and just 13 in 2007. Heightened security measures have failed to stop the criminal syndicates that officials say are responsible for the killing. The animals’ distinctive horns are hacked off to be smuggled to the lucrative Asian black market, where the fingernail-like substance is falsely believed to have powerful healing properties. AFP PHOTO / STEPHANE DE SAKUTINSTEPHANE DE SAKUTIN/AFP/GettyImages